Tubecon, in Helsinki (Finland), is the biggest YouTube related event in Scandinavia. Read more about it and the success of YouTube in Finland in my article for the Foreign Correspondents’ Programme.

Kids don’t watch TV anymore; they watch YouTube instead. This statement is becoming common in many countries worldwide and Finland is not an exception: recent data show that 18% of Finns between 15 and 39 years of age watch YouTube every day.

The (Finnish) national YouTube community is in a continuous growth: 357 YouTube channels have more than 10,000 subscribers and 45 channels have got over 100,000 subscribers. Most of these channels are Finnish-speaking. Victor Potrel from YouTube HQ in London said that such a large community for a language of 5.5 million speakers is a unique phenomenon for the online video platform.

These channels represent a wide offer of diverse content. Video creators are developing a strong engagement with their audiences both through their videos and through social media profiles. “Is like meeting a friend”, Potrel said.

This strong engagement is what made Tubecon a reality: in 2013, some of the most successful Finnish YouTube creators were setting regular meet-ups with their fans, but when attendance to these informal gatherings was reaching 2,000 people, they realized that there is a need for a more structured event allowing a larger capacity. Tubecon was on the making.

The creators contacted producers with experience of media and events and, always in control of the decision-making over the event’s content, the producers gave them a more structured support on what an event like this represents in terms of production, security, logistics and press & media relations. Tubecon 2014 gathered over 5,000 people and the figure doubled to 10,000 attendants at Tubecon 2015 last Saturday, 15 August 2015, at Hartwall Arena in Helsinki.

First weekend: Tubecon, the biggest YouTuber event in Scandinavia was organized in Helsinki on 15 August 2015.

YouTube creators and their fans gathered around the hockey arena and the Hartwall corridors. Surprisingly quiet teenagers – especially quiet if you compare them to Spanish teens – queued to get an autograph from or a selfie with their idols. There were creators like Susanne (Pahalapsi), part-time vlogger & part-time baker, or the Stunt Freaks Team, who employ a team of around 20 people with their extreme sports videos. Among the audiences, you could meet Santeri (17) – who proudly showed his notebook full of autographs – Paju (13), Anna (13), Havu (9) and Urpu (6), who travelled all the way from Kuhmoinen, in Western Finland, only to attend Tubecon.

More testimonials in the gallery bellow:
(Click on the pictures for the full caption)

Santeri (17) is into gaming videos, mainly. Showing a notebook filled in with autographs, he admits that watches YouTube videos for around 24 hours per week.

Sofia (15), Eevi (16) and Momma (14) were queuing to meet one of their idols. They watch more YouTube than TV, from makeup tutorials to lifestyle or gaming.

Ville Kankare (left) and Emppu Koivula (right) are two of the creators behind Krouppi, a Finnish­speaking comedy channel with more than 74,000 subscribers.

Mehis and Timiz (16) are from Joensuu (Eastern Finland) were volunteers at Tubecon 2014. They share a small music and comedy YouTube channel: Mukkaro. 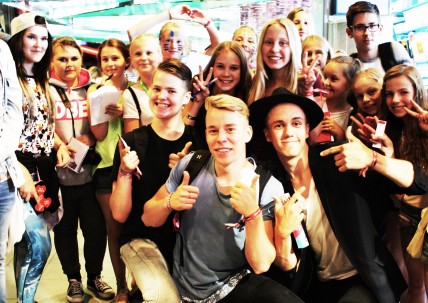 Totte (middle) has being doing videos for 7 years in three different channels. His friends, both sides, made jokes about being bodyguards protecting him from the fans.

JP Puhakka shares the channel A­Lapset – over 63,000 subscribers – with two friends, all born in 1998 and living in Turku.

Susanne (Pahalapsi) affirms that not all her fans follow her dark aesthetics. She is close to 40.000 subscribers but her income still comes from her work as a baker. 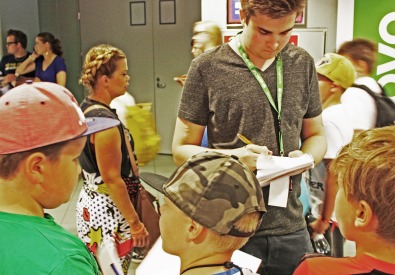 Teemu Lindgren (17) is behind the gaming channel Tepatus (27,000 subscribers). He has being doing videos for 6 years, in different channels.

Benjamin (16) is a member of Ruuti, the youth council on the City of Helsinki. Most of the videos he watches regularly come from small creators, abroad Finland.

This was originally published on August 17th, 2015 in the thisisFINLAND Foreign Correspondents’ Programme blog.  The Foreign Correspondents’ Programme (FCP) is organized by Ministry for Foreign Affairs of Finland since 1990 and provides an opportunity for young journalists to learn more about Finland, Finnish society and the Finnish way of life. In 2015, I was the Spanish participant in a group of 21 journalists from 19 countries.

More about it on my Tumblr.

Journalist in the age of new media. Pop culture nerd and social media Jedi. Exploring the potential of technology and media to deliver information and entertainment to global audiences. View all posts by Oriol Salvador