END_OF_DOCUMENT_TOKEN_TO_BE_REPLACED

The foundation of MTV as a “mood enhancer” and the replacement of music videos for reality TV-shows in the recent years.

In contemporary societies, the media is not only considered an entertainment or a source of information, it is part of human life and how humans socialize.

The media that people consume says a lot of who they are. For instance, political views are fairly reflected on the political views of the media outlets consumed. Media also influence interactions of humans on their daily activities. Think, for example, on how much of the topics on your daily conversations with friends or acquaintances are related to media or on how media influences current debates on social and political issues. As much as media seems inseparable from people’s life, it’s closely related to contemporary history, which is fairly reflected in the media.

Mass media and mass popular culture is assumed to be commercially motivated and is difficult to determine whether it reflects audience interest or intentionally shapes and manipulates them, according to the interest of those who produce it.

Celebrities are the myths of this time and many memories people has come from a song, a movie or even a TV channel.

Traditionally, aspects such as religion, family or work defined people’s identities, but this has gone in favor of different aspects such as leisure activities, consumer lifestyles and, specially, mass media. The media is partly responsible, furthermore, on how leisure or consumer lifestyles are defined. It is a big part of people’s identity, with several commonalities produced from shared experiences through mass media. It also defines collective imagery and memories: celebrities from the media are the myths of this time and many memories people has come from a song, a movie or even a TV channel, all different kinds of media. END_OF_DOCUMENT_TOKEN_TO_BE_REPLACED

Critical analysis over the processes of production and reception of experimental documentaries.

The video installation Script, by Brazilian artist Veridiana Zurita, was featured in Possible Futures (October 10-26th, 2013), the last activity of VOORUIT100, a six- month celebration for the 100th anniversary of Vooruit, the historic building in the city of Ghent (Belgium), currently used as a music venue, cafeteria and arts centre.

Script explores the relations between two women, a mother and a daughter. The daughter is Zurita and her mother is a psychoanalyst, based in Sao Paolo (Brazil).

The project is based in the meeting of these two women during two weeks, when they both recorded themselves on video while playing their social, familiar and affective roles, exploring themselves and the relation to the other. END_OF_DOCUMENT_TOKEN_TO_BE_REPLACED

Movie review of the French animated comedy-drama film Ernest et Célestine (2012), based on children’s books by the Belgian author and illustrator Gabrielle Vincent. 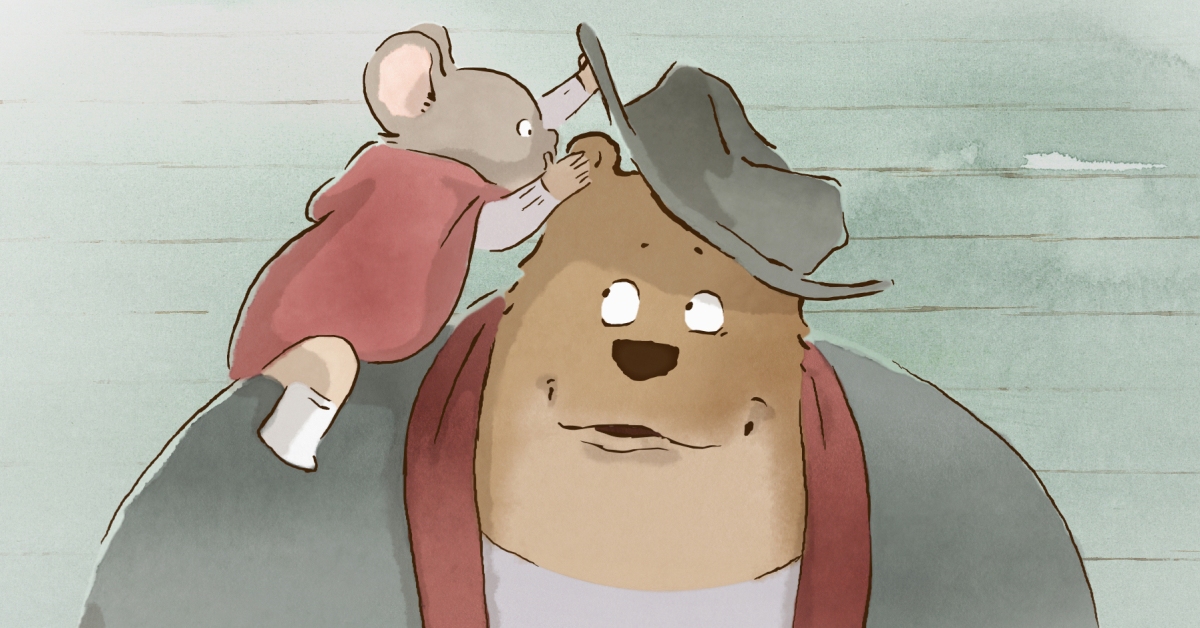 This is not the first time that anthropomorphized animals are used to show the glories and miseries of our society. The technique is as old as humanity and is tied close to a little mouse that became the icon for a major animation film company (and for the 20th century in general) or even further, with the earliest fairy tales.

In the traditionally crafted animated film Ernest & Célestine, it is shown through two main characters, a little mouse and a big bear, outsiders of their respective societies, living in parallel worlds on the surface and in the underground.

END_OF_DOCUMENT_TOKEN_TO_BE_REPLACED

Participatory feature story where I share how a group of international and exchange students at Thompson Rivers University learned the most Canadian thing you can learn: how to play hockey. 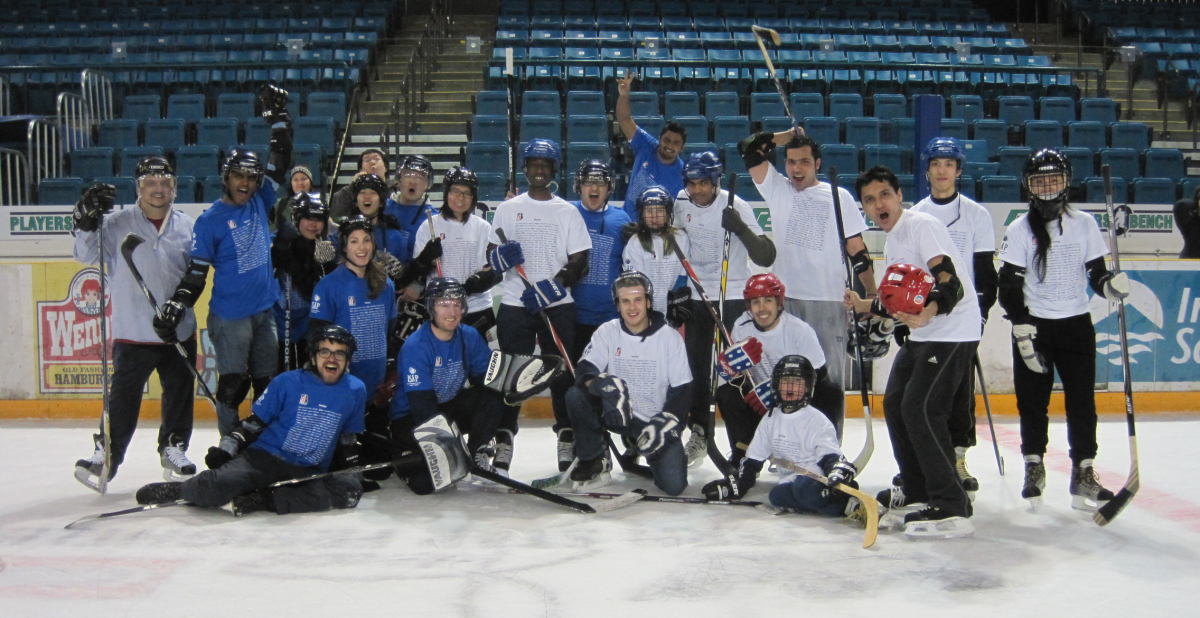 We could barely balance standing on our skates: some of us had never skated before, and many of us didn’t know how to stop. For us, ice hockey was an exotic game. Even though we were familiar with other forms of hockey – roller or field – they were not the most popular sports in our home countries, not like it is in Canada.

The activity was organized by the International Students Activity Program (ISAP) of TRU World at Thompson Rivers University, and it had a group of international and exchange students, inexperienced or novices at ice hockey, getting together to try out the game.

“We know what we have to offer,” said Jilian Folk, ISAP coordinator since October 2012. “You can go out there and explore different things you may not feel comfortable doing on your own. I don’t know if you would go out there and rent hockey equipment, find someone to coach you… so I think this activity is a really good opportunity for you guys.”

As an exchange student at TRU from Barcelona (Spain), I am often asked about Barça, my hometown soccer team, but I never cared much about soccer. Indeed, I’m not interested in sports, but for me, as for many students who signed up, this activity was a good chance to get deeply involved in a game that is rooted in the Canadian culture.

“Hockey dominates Canadian culture. It’s not that every Canadian loves hockey but it is something that connects us, much like football (soccer) is in Spain,” said Craig Engleson, manager of activities and events at TRU World. “Not every Spanish person loves soccer, but there is a common language, memories that are involved with that… It’s the same with hockey here. It’s common.”

This was the second year ISAP organized the winter semester activity.

Our little big challenge was to play a brief friendly game during the intermission, after the second period in the match between the Kamloops Blazers and the Vancouver Giants on Feb. 27 at the Interior Savings Centre (Kamloops), in front of more than 5,000 people. To learn how to play, we had three training sessions – Feb 12, 19 and 22 – at which we learned the basic rules of the game, what a puck is and how to control it.

This is the story of us, inexpert hockey players trying to do our best just for the fun of it. END_OF_DOCUMENT_TOKEN_TO_BE_REPLACED

The Kamloops Film Society (KFS) originally started in 1972, when film fans gathered to watch and discuss classic and current cinema. First known as Cariboo College Film Club, they neramed as Kamloops Film Society in 1994, under the Societies Act, and focused on three significant types of cinema – independent, classic and foreign – shown in weekly series that eventually became seasonal. In the early years, the Society independently booked films with distributors and booking agents directly but in 1994 they entered the Toronto International Film Festival (TIFF) film circuit. Before the Kamloops Film Festival became a reality, in the early 1990’s, a PR officer, from the local ski resort Sun Peaks, approached the KFS with the idea of bringing the best of the Vancouver Film Festival to Kamloops.

Meanwhile, a Vancouver organization called ‘Moving Pictures’ headed by John Duppong, began a travelling film festival throughout the BC interior. In 1992, Duppong approached the KFS for support on Shadows on The Wall: The Meeting of the Waters Film Festival, an event held over three days in two separate venues on opposite sides of the city.

The partnership continued and, in 1996, the third edition of ‘Moving Pictures’ The Travelling Canadian Film Festival stopped in Kamloops for the first time, March 29-31, and included Canadian and French dramatic film released from 1990 to 1995 plus documentaries and short films. Three film and short film directors featured in the festival – Michael Gibson (Defy Gravity), Gary Burns (The Suburbanators) and James Genn (Direct Lines) – were invited to the special event Short Cuts & Long Shots, a workshop about getting started in filmmaking.

A year after, the Kamloops Film Society took up the role of ‘Moving Pictures’ and organized their own first KFS Film Festival. From 1997 to 2000, the first editions of the festival brought to Kamloops movies from Canada, United States, Belgium, Italy, United Kingdom and Spain. Directors such as Atom Egoyan (The Sweet Hereafter), Bruce Sweeney (Dirty) and Ryan Bonder (DayDrifit): producers like Rosamon Norbury (Better Than Chocolate) and actress Gabrielle Rose (The Five Senses) visited Kamloops, attended the showings and accepted Q&A periods.

END_OF_DOCUMENT_TOKEN_TO_BE_REPLACED

Review of the play Curse of the Starving Class, written by the American playwright and actor Sam Shepard in 1978 and performed by students of the Theatre program at Thompson Rivers University (TRU).

Playwright and actor Sam Shepard wrote the play Curse of the Starving Class in 1978 but in the words of Wesley Eccleston, a professor with the TRU theatre arts program, it is still relevant because “families still struggle with the (same) challenges.” Eccleston directs the production, which starts Feb. 28 at the Actors Workshop Theatre in Old Main.

The characters are part of the Tate family, a dysfunctional American family where the dad, Weston (Michael Hogg), spends long periods away from home and comes back drunk and aggressive while son, Wesley (Justin Hall), pees on the floor of the kitchen, daughter Emma (Allison Clow) plans her escape and mother Ella (Alley Barton) wonders how to work it out and go to Europe.

“These characters are starving for the things they think will make them happy,” Eccleston said.

END_OF_DOCUMENT_TOKEN_TO_BE_REPLACED

Profile of the independent filmmaker from Paris, the original creator of La Blogothèque’s Concert à Emporter (Take Away Shows).

Mathieu Saura, better known as Vincent Moon, is one of the greatest and more respected filmmakers you can find, nowadays, licensing his work under Creative Commons, allowing its use and remix for derivate works. His work is available for free on Internet, he is a nomade artist building an audience on social media and keeping his projects alive by donations (crowdfunding).